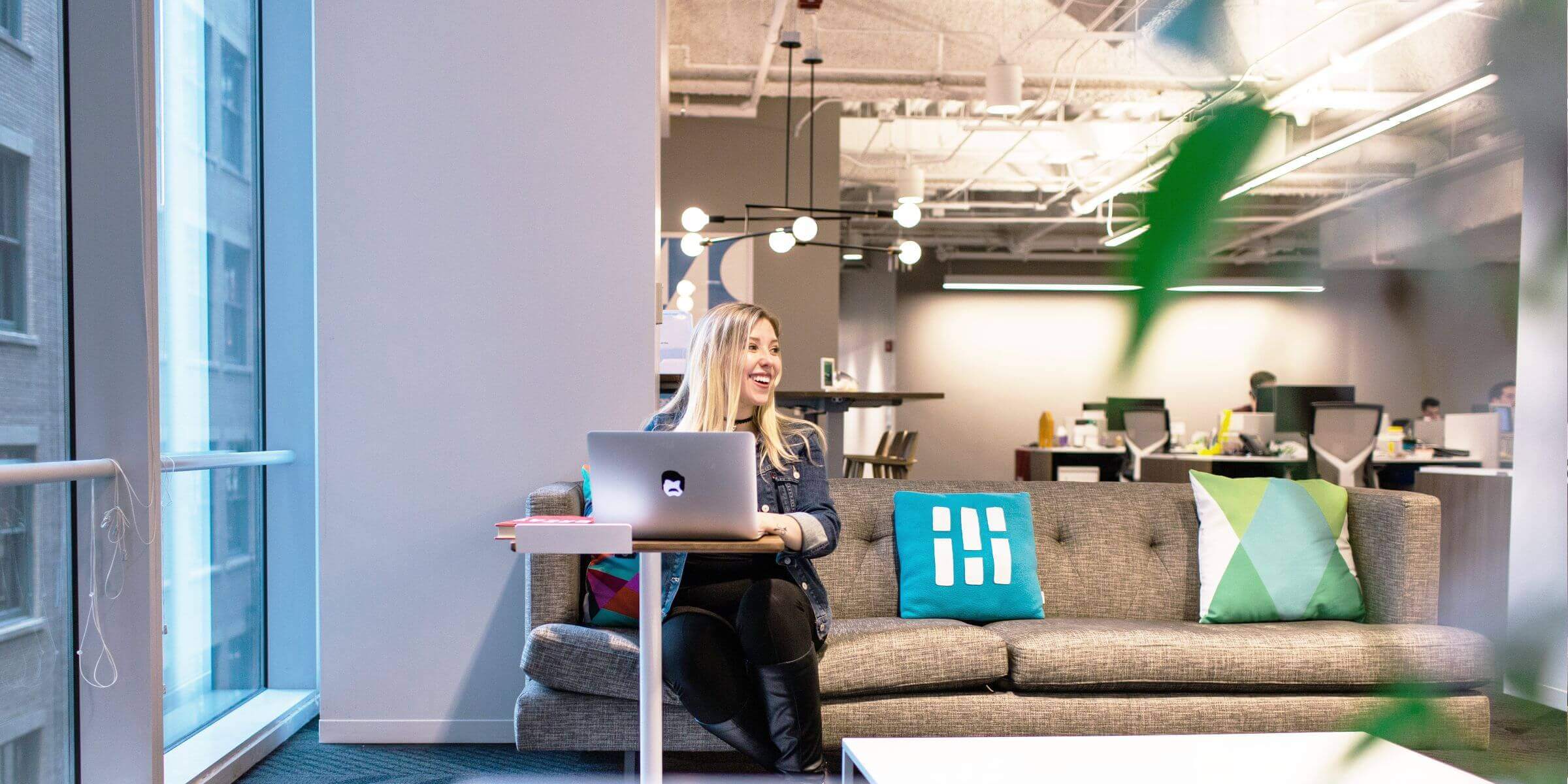 How does one become the “beating heart” of an office?

At Sprout Social Katy Harth leveraged her administrative position into a fulfilling, challenging, and creative career. The opera-singing Office Manager is the queen of a truly epic (and diet-inclusive) snack room, the organizational mastermind behind a 240-person overnight office relocation, and a passionate advocate for the diverse and rapidly growing staff at this Chicago tech giant.

In 2014, Katy was the 100th team member at Sprout Social, which makes social media software for businesses. At the time, Katy mostly viewed the position as a day job to pay off her student loans. When she began at the company as a receptionist, she was answering phones and providing a welcoming face for Sprout Social’s many visitors. However, the company was growing quickly and she soon found herself pitching in on other projects, from in-office events to analyzing how customers were using the main phone line.

It wasn’t an accident that Katy found herself working across departments; in fact, she intentionally leaned in. “It can be easy to become complacent in a receptionist role,” she explains, “and you can get trapped at the desk.” After finding her sea legs, Katy started asking for more responsibility. “As soon as I felt like I could handle it, I asked for it,” she explained. She worked with the Chief Creative Officer on making the reception area warmer and more welcoming, tackled a conference room system redesign, and leveraged desserts—yes, desserts—to build her connections. Every week she brought a different baked good to the office. “It was a way to encourage people to come visit me, to tell them ‘I want to see you and get to know you!’ I made myself very visible, very accessible.” Through her treats, she met leaders in every department and got new and challenging assignments. “The things you can do with sugar!” she laughed.

Nine months into the gig, Katy walked into work to find an email in her inbox from the VP of Operations: “Come to my office when you get in this morning.” More than a little foreboding. When she arrived at the office, she found the Director of Talent waiting for her too. Instead of a reprimand, it was a promotion: they offered her the Office Manager job. The new role came with big buckets of new work, including office-wide calendar management, employee onboarding, and—wait for it—managing the snack room. To Katy and her team, snacks are not just snacks. They are a reflection of the care and consideration that each staff member deserves, and their variety mirrors the individual personalities and preferences of the Sprout Social team. “I became passionate about knowing each and every employee on a dietary level,” Katy explains. Some employees were on the Whole30 diet, others had allergies, religious, or health-related needs.

“When I first transitioned to the role, the snack room had conventional office snacks like chips and granola bars. I sampled the landscape to make sure we have choices for everyone. When someone realizes that they are being seen and valued as a human—and that includes what they eat—something lights up in them.” From Flamin’ Hot Cheetos to hardboiled eggs, the snack room has everything and anything that an employee could want. To keep the snack room up to date, Katy relies on two helpers from Managed by Q. “They let me be three places at once!” she says, delighted.

In December of 2016, Katy and the office operations team faced a massive challenge. They needed to move 240 people from the 10th floor to the 7th floor of their building in Chicago. The move needed to be flawless, because the following day was a company-wide “science fair” showcasing Hack Week projects in areas throughout their new space. The logistics were tremendous: 240 monitors, keyboards, and the mountains of personal detritus that stacks up in any office environment. Sprout Social partnered with Rent-a-crate, and Katy organized a system of “Move Mavens” to assist on the big day. Each Maven was responsible for twelve people, and they were chosen carefully, “Who are our cultural leaders? Who won’t be afraid to speak up if someone did it wrong?” It was December 22nd (“It was a memorable date!” Katy says) and they even had to account for employees already on vacation.

As if the logistics weren’t overwhelming enough, there was a twist: the new space was a secret. Staff had yet to see their new offices, and the moving team wanted to preserve the big reveal of the gorgeous new space. After leaving the office around midnight on the eve of the move, Katy was back at Sprout Social by 7am to organize a welcome committee. Cheering with giant green pompoms, the “counselors” helped arriving employees find their new desks. “I still get chills and butterflies when I think about it,” says Katy. “The energy was so high, and I got to watch everyone’s faces when they walked into the new space.”

That 240 people that Katy moved? They now number almost 400, as Sprout Social has hired over 130 new employees so far in 2017 and continues to grow. That growth, while exciting, has changed Katy’s role. “I’m a person who values utility in myself. When I can see the tangible work I’m doing, it gives me immense satisfaction,” she explained. As Sprout Social has grown, Katy has had to let go of that utility motivation and grow into a more senior role with more opportunity to strategize and think long-term. “I used to be able to be more reactive, and now I’m learning to delegate and prioritize.”

As the most tenured person on her team, she considers herself a cultural historian of Sprout Social, and that means working to preserve the ambiance and attitude that makes Sprout a special place to work. At Sprout Social, “People are people first.” It’s not only about family-friendly policies, but acknowledging that every employee is a whole person with unique and interesting passions outside of work. Hobbies and personal interests aren’t hidden, but celebrated. One place this shines through is in Sprout Social’s quarterly Value Awards, which recognize team members who embody the company’s core values and truly go above and beyond. These individuals are recognized at the company-wide all hands meeting, where their manager highlights their contributions and honorees receive unique, highly personalized awards. One recent award-winner, for example, was a Marketing Developer and musician who received a Rickenbacker guitar.

Katy has also received a Value Award where she recognized for the incredible, thoughtful care she takes of Team Sprout Social. Her award was a night out with friends and a spa experience so she could relax and be taken care of too. Sprout Social sees people as unique, so the way they are celebrated should be unique too. Those individual passions, they believe, make people better at their jobs.

“People who have fun are more willing to build valuable and vulnerable relationships with other one another,” Katy says, “We’re a design-centered company; if something isn’t intuitive and doesn’t feel good, people won’t use it.” She adds, “Happy people are just more productive.”