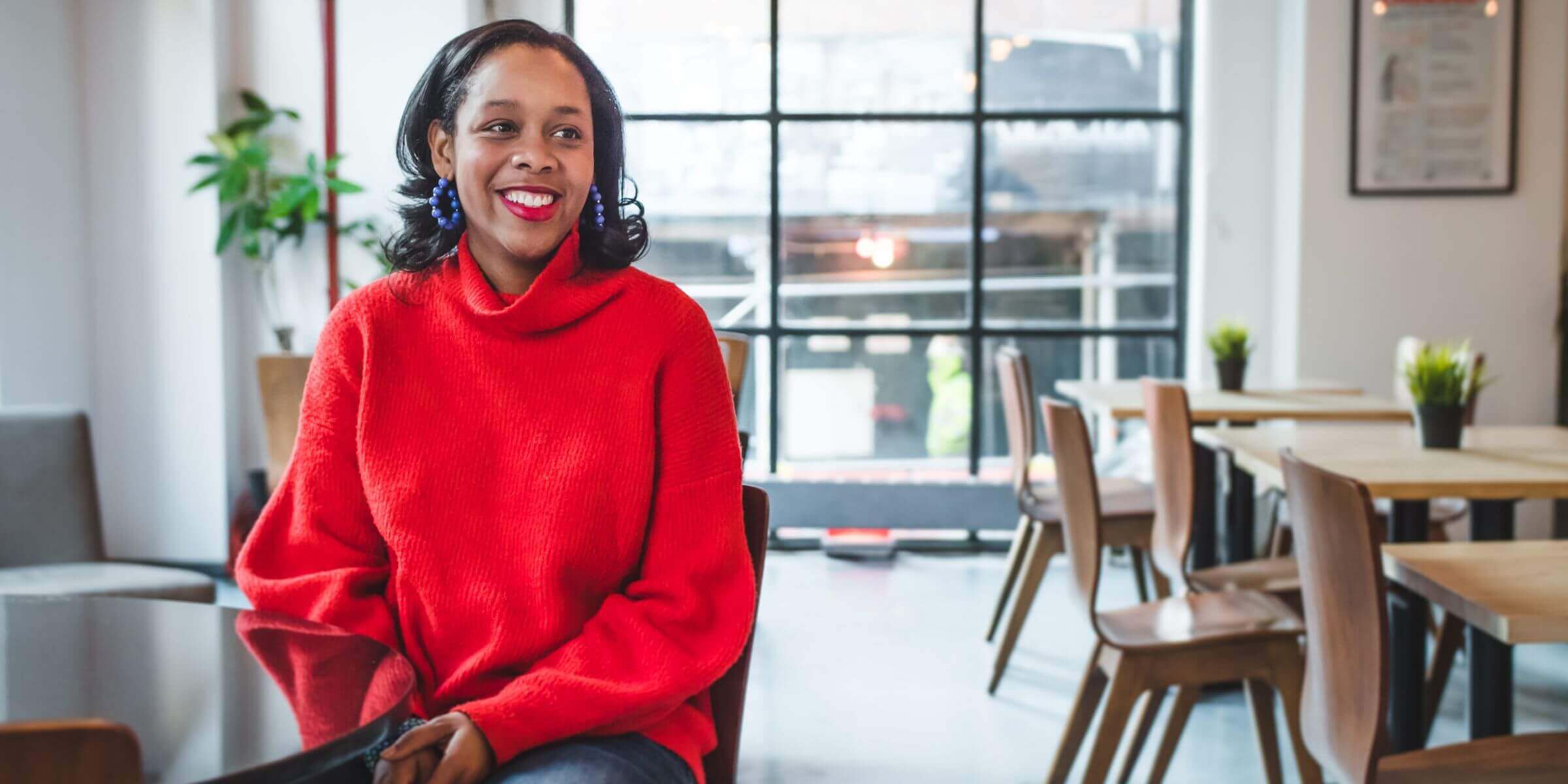 Whether professional or social, it’s rare to find a space where people can truly make a connection, especially when the people in attendance have different backgrounds and personalities. How do you create opportunities for them to all talk in ways that feel holistic and not forced?

These are the questions that Kia Brooks, the Associate Director of Sales and Operations at the Made in NY Media Center by IFP, takes into consideration as she strives to create an environment where the center’s members and the larger Brooklyn tech and media communities can come together for workshops, film screenings, and events.

Kia excels at creating moments where everyone feels welcome. Her earliest event planning experiences date back to her childhood birthday parties, where instead of receiving presents, she looked forward to crafting specific celebratory experiences for herself and her friends. When she went on to college she continued this streak by organizing events for her sorority.

After graduating from American University with a degree in public communication and a minor in marketing, she moved to New York with a passion for film. After interning at a few film companies, both in production and PR, she reached out directly to the head of PR at the Tribeca Film Festival. This resulted in an internship and assistant opportunity, and Kia quickly gained on-the-ground experience managing PR campaigns for the Tribeca Film Festival’s short films.

From there she was able to launch her career as a publicist at leading film PR companies and distributors including Film First Co, Oscilloscope Laboratories, Focus Features, and Amplify Releasing. She planned premieres, award publicity campaigns, and special NYC events for popular and critically acclaimed films like Dallas Buyers Club, Nas: Time Is Illmatic, Moonrise Kingdom, Anna Karenina, We Need To Talk About Kevin, and Hyde Park on Hudson.

But after over 6 years of working in film PR, Kia realized that she wanted to try something new. She worked at a stationery shop, took on a few freelance PR clients in areas outside of film, and experimented with where to take take her career next. Through her network, she heard about an open position at the Made in NY Media Center by IFP, a place that had intrigued her since she had heard of its opening in 2013. She joined as its Events and Operations Manager in March 2015, before moving to her current role as Associate Director of Sales and Operations. Located in the Brooklyn neighborhood of DUMBO, the Made in NY Media Center by IFP is a 20,000 square-foot facility dedicated to supporting entrepreneurs, artists, and innovators with resources, workspace, educational and networking opportunities, and events. It includes a co-working space, 72-seat screening room, café, various meeting spaces, production suites, and an immersive media arts gallery. Evening events are usually open to the public.

For those who work out of the space, there are two levels of membership: a community “hot desk” membership that caters to the solo freelancer or entrepreneur looking to work out of any open seat, or an incubator membership with a dedicated desk, which is well-suited for small media or tech companies of 2 to 4 people. The Media Center also has a Made in NY Fellowship program that awards twelve-month memberships to the Incubator workspace.

Kia’s past experiences in events, film, and PR made her role at the Media Center a natural fit. The multifunctional nature of the space means that every day is different. At any given time, she oversees membership sales, event rentals, internal event logistics, client outreach, vendor relations, and general operations. She also attends external events to in order to cultivate clients and gain a greater understanding of the challenges facing small, creative businesses so she can be better prepared to meet their ever-changing needs.

As she approaches her three-year anniversary at the Media Center, her role has expanded to include building sponsorships and partnerships, as well as planning strategic initiatives that will guide the organization into the future. Expanding beyond film and tech, the Media Center has recently launched initiatives dedicated to podcasting and audio storytelling, Virtual Reality, and serialized content, with a goal of ensuring that the Media Center serves a wider media community.

This effort starts with the staff, who work in the same open floor area as the members, to ensure that members know they’re accessible and available to answer questions whenever the need arises. Kia works to ensure members know all the staff’s names and vice-versa. And within the Media Center staff itself, everyone has the agency to feel that they can talk about the space or give a tour. The events that take place in the evenings and on weekends bring in the wider media and tech community, and have established the Media Center as a cultural hub in the DUMBO neighborhood. The Media Center regularly hosts gallery openings, industry conferences, hackathons, and curated film screenings. Having these events brings people to the neighborhood outside of working hours, a welcome prospect for DUMBO, which can sometimes feel desolate after people head home from work.

Ultimately, the Made in NY Media Center by IFP strives to be a place that not only brings creators together, but provides the resources and opportunities that will help them be sustainable. Kia cites the success of a company with an incubator membership that grew from a team of 2 people to 17 within a year and a half. Even though they ultimately outgrew the space, it meant their time at the Media Center helped them to grow, thrive, and move on to their next phase.

Kia’s role at the Made in NY Media Center by IFP has evolved along with her career. She credits her ability to be multi-faceted as crucial to allowing her to pursue different paths. She encourages anyone who feels confined to a box career-wise to consider how they can create their own outside opportunities. If that’s not possible within your current position, there are other ways to supplement your work experience. Kia has taken classes at NYU’s School of Continuing Education and Professional Studies, and regularly attends networking events. But more often than not, she believes stretching your skills is possible within your current company; it just takes a little initiative.

“Don’t be afraid to ask to participate in something or to learn something new,” she says. “A lot of times you’ll find that if you had just asked to be involved, you could have been. People oftentimes get ideas in their heads that their involvement isn’t wanted, but all they had to do was ask.”