Connected Spaces and the Future of Work 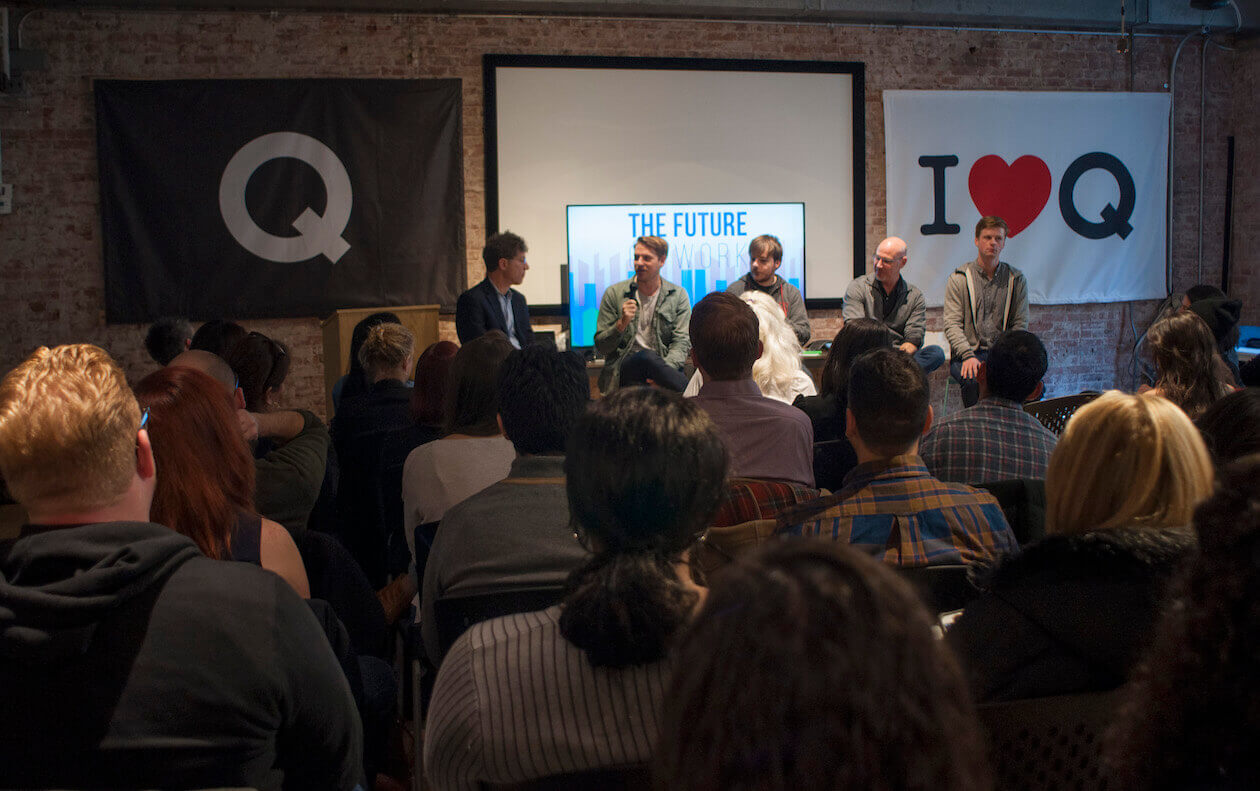 This week we were excited to host the first-ever Future of Work panel discussion, bringing together the founders of Envoy, KISI, PivotDesk, and — you guessed it—Managed by Q. As big fans of the office of the future, the conversation naturally took place at Q’s headquarters in NYC.

he workplace environment is quickly shifting — something Q has known and championed for nearly two years now. The discussion reinforced that the future is bright for tech-enabled office management services.

Do The Nap Pods Really Matter?

Grant opened the conversation with a topic we care about deeply — office culture. With the mic already in our co-founder and CEO Dan Teran’s hands from introductions, he was quick to explain that there are actually two distinct types of culture.

“There’s company culture, which is how a business brings their values into the world,” he said. “Then there’s office culture, which has become a means to attract talent.”

At Managed by Q, company culture doesn’t mean the ping pong table, free snacks or cold brew kegerator. Company culture is defined by our mission, our code, and the way we operate everyday. But office culture has become more significant as companies increasingly compete for talent — it’s a differentiator. “In San Francisco, engineers are impossible to get,” said Larry Gadea, founder and CEO of Envoy. “To deal with that, you want to create a friendly and inviting office for them to work in.”

Dan drove home the point that knowledge workers are more important than ever. To attract the best talent, you have to create an office environment where employees are stoked to be a part of the team.

No, Robots Aren’t Taking Over Your Job

Dog-friendly offices and in-office massages are just a small piece of the puzzle. Office culture plays a role in what we do best — making sure offices are running smoothly.

Tech-enabled services like Q, Envoy, and KISI free up valuable time, so employees can focus on higher-value work.

As Larry put it, “we’re not replacing people — we’re helping them do way more.”

With more bandwidth for office managers and operations teams, that talent you hired will be more productive. In fact, freeing up their time to focus on more important things even can facilitate promotions and career growth.

PivotDesk co-founder and CEO David Mandell explained that, “there’s a difference between a cost-conscious CEO and a value-conscious CEO.” The focus should be on increasing productivity and driving value. “CEOs should be empowering workers to add value every step of the way,” David added. That mindset can make a big difference in company culture and performance. “We integrate our service with a bunch of platforms so people can export the data and analyze it to make decisions,” Larry said. That big picture data — which is far more than a paper-based sign-in book at the reception desk — can help make cost-based decisions, such as when to increase cleaning staff based on the number of office visitors.

Speaking of cleaning…the data Managed by Q collects is what enables us to improve our services going forward. Based on square footage, number of employees, and consumption rates, “we may know when a tenant is going to move and break their lease before they do,” Dan said. “We can also help index average spend per capita to market rents.”

A member of the audience asked if there would be a future with a single platform that integrates all of these services into a central dashboard. The answer was a resounding and unanimous yes — in fact, Managed by Q’s mission of building an operating system for offices is exactly that — having all of that data in one place will allow people to run their offices well and make better business decisions. This year, Managed by Q is enriching our platform to make it even easier to manage all the services office managers need to run their space — all from one, centralized dashboard, bringing us steps (in fact, leaps) closer to building that OS for offices.

Still to come is filling the technology gap between tenants and landlords. “The building doesn’t make decisions on behalf of their tenants,” said Larry. “Something would have to happen to force a building to change.”

According to Dan and David, strong enough demand and brand loyalty among tenants could prompt landlords to give in to change. Bernhard Mehl, co-founder and CEO of KISI, believes the desire to attract and retain top tenants may be the straw that breaks the landlord’s back.

Whatever the catalyst is, “being able to outsource the more mundane tasks of office management enables people to focus on building something special and unique for their company,” said Dan. “Nobody starts a business to run an office, but somebody has to do it.”