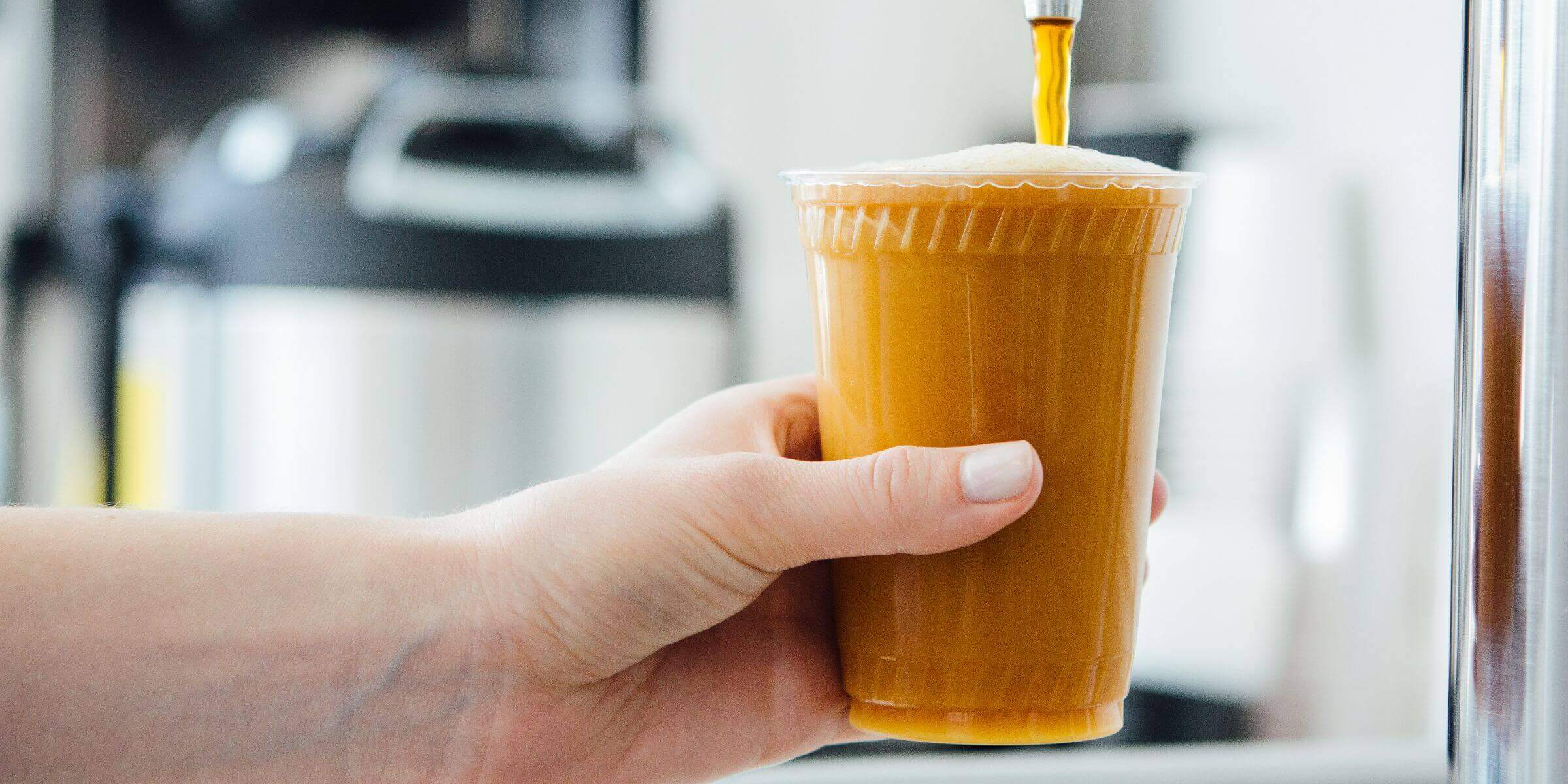 You guessed it: Coffee.

That sweet (or bitter), smooth (or burnt), dark brown (or light) nectar of the gods. That delicious, habit-forming, buzz-inducing, social lubricant of the laboring masses. That beverage, which gives you a boss-approved excuse to take a break and bonds co-workers of all stripes in pursuit of a 2pm pick-me-up, is an expected part of the office kitchen offerings, whether you work at a century old financial firm or a brand-new startup.

David Belanich would know. As one third of the Belanich Brother trio (rounded out by Adam and Noah) that started Joyride Coffee, he takes this workplace perk very seriously. Back in 2009, David and his brothers launched a food truck that served froyo and Stumptown coffee. As they drove from skyscraper to skyscraper serving the office-workers of New York City, they noticed that the coffee was the real draw. “Don’t you have free coffee in your offices?” they asked the line-waiters, “Why yes,” they replied, “but we hate it.”

As it turns out, to many employees, “office coffee” is a dirty word. Belanich saw an opportunity, and by 2011, the team at Joyride Coffee had sold the food truck and turned their attention to getting high-quality, locally-sourced coffee—specifically cold brew, thanks to food truck experience—into office refrigerators across Manhattan. They started with half-gallon growlers and made deliveries in Belanich’s brother’s Audi, but when they had to attach a Thule cargo-carrier to the top of the car, they realized they needed an upgrade. As their delivery mechanism scaled up, so did their product; some offices wanted more than just a few growlers of the magic brew, and thus, the kegerator was born.

“People go crazy for the kegerators,” says Belanich, “It’s something about pulling on the tap and getting any amount that you want.” Plus, he added, “there’s this quirkiness about the format, and a little naughtiness. It’s like beer…. but it’s not beer.” One of their earliest New York clients was BuzzFeed, where the staff went “bananas” for the kegs. Upon delivery of the first keg of cold brew, Joyride got an actual standing ovation from the staff. Belanich laughs, “Our delivery driver was new, and he used to work at DHL, so…. this was something really different for him.”

Gawker Media (“RIP” says Belanich) was another early client, and they created a little micro-site where employees could check if the kegerator was full. “It really took on a life of its own,” he said. Joyride Coffee now serves offices in New York, San Francisco, LA, Boston and other cities nationwide. (Managed by Q is also proud to be a Joyride Coffee customer.) What started with cold brew has since expanded to what Joyride Coffee calls “Craft on Draft”—non-coffee, non-alcoholic beverages that include everything from Kombucha and Nitro iced tea to Switchel. Switchel? Yes, Switchel, a New England-style ginger beer-esque beverage with just four ingredients; water, ginger, apple cider vinegar, and maple syrup. In some quarters, it’s known as the “farmer’s Gatorade.” Joyride Coffee gets their Switchel from Up Mountain Switchel, a Vermont-based company that makes the beverage themselves and sells it at farmer’s markets, ski resorts, and now, swanky office buildings. The Switchel story gets at one of Joyride’s core values: innovation. When they work with an outside vendor, they want to make sure the beverage is authentic, made in-house, and not just a label slapped on somebody else’s product. Other partners include Grady’s Cold Brew, a New Orleans-style chicory roast, and Steven Smith Teamaker’s Masala Chai Nitro, as well as New York’s RISE Brewing Company.

And speaking of in-house, Joyride Coffee does a lot of the manufacturing themselves in their New York City and San Francisco breweries. Cold brewing, as it turns out, is an art-form unto itself. One of the things Belanich is most proud of is bringing their cold-brewing artistry to the best beans, thus enabling small roasteries to add cold-brew to their product line. For many small bean companies, investing in the whole lifecycle of a cold brew—from the positive-pressure brewing environment to the refrigerated trucks to the stainless-steel reusable kegs—doesn’t make financial sense. “We partner with folks that are really good at knowing the farmers, sourcing the beans, and roasting,” says Belanich. Partnerships with experienced roasters, like LA’s LAMILL and Boston’s George Howell, bring together two sets of distinct expertise—roasting and brewing—into a delicious product that makes the work day seem to fly by.

Offices need a place, like the proverbial water cooler, that is a meeting place where co-workers go to take a break, refuel, and share a social moment. Belanich sees the Joyride Coffee’s full cafe-quality hot coffee program and “Craft on Draft” kegs as filling this role in the modern workplace. “Work is about hustling and getting stuff done, and coffee is the perfect accompaniment to productivity,” he says. Millennial workers in particular are special breed. For all the talk of spoiled employees who want all the perks without the work, Belanich sees something different in the way Millennials approach products. “Kids who grew up with the internet [and he includes himself in this set] have a real desire to not give people crappy products and experiences.” He feels that Joyride Coffee, and other Millennial-owned companies, have “an aspiration to do better.”

Sustainability, healthy eating, and ethical sourcing of products are also key factors for the next generation of consumers and business-owners. Whether it’s Everlane’s transparency in manufacturing or Toms’ “one-for-one” business model, their values guide how these companies do business. These values also guide Joyride Coffee. Their cold brew is delivered in reusable kegs and can be enjoyed in the office out of washable glasses—no more buying cold brew by the disposable cup full or brewing coffee out of individual, plastic capsules. In addition, their products contain no sugar or additives—much healthier than an afternoon soda. On Twitter and Instagram, the accolades roll in: “Epic afternoon cold brew” says one fan, or even, “This cold brew is life. I would sacrifice 60% of our snacks to keep this puppy on tap.” High praise, given that snacks are a key workplace perk for many younger workers.

As for their bosses, or the office managers and facilities staff who stock the beverage selection, coffee on tap is a cost-friendly alternative to bottled drinks. Without plastic bottles, or...ahem… mini-plastic cups, a company like Joyride Coffee can drive down the cost per serving. “People want better options,” says Belanich, “They are sick and tired of the same old stuff that’s expensive, not great for you, and doesn’t even taste good.” “Coffee is the most wonderful beverage on earth,” he says, “It gives you energy, with no calories. It’s a gift to mankind.” Shouldn’t the most wonderful beverage on earth be wonderful at work too? After all, most of us spend a third of our lives in offices. It’s time to reclaim “office coffee” from the dirty word bin, and Joyride Coffee is attempting to do just that.