The Benefits of Nurturing Company Culture 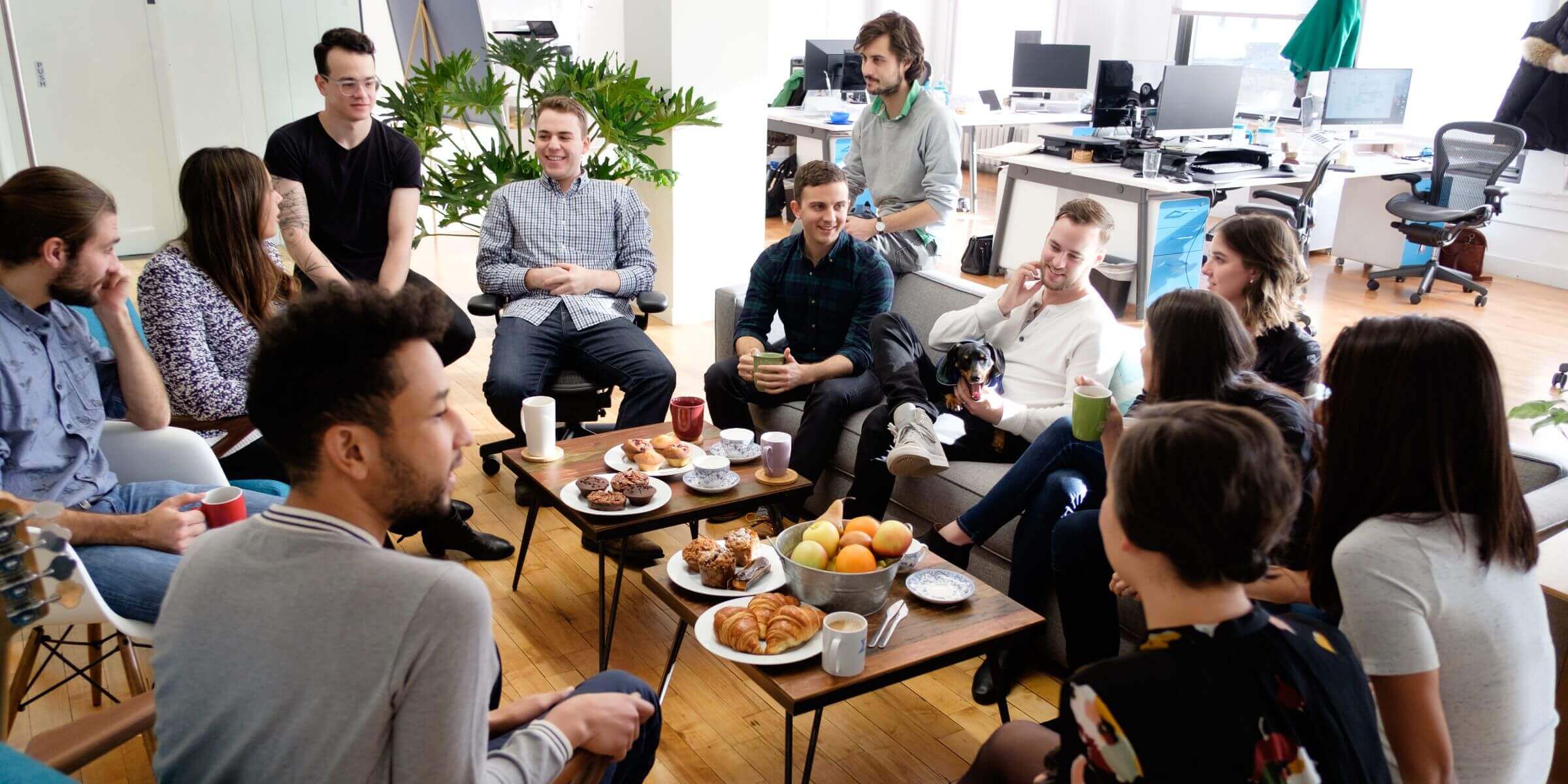 It is no secret that the landscape of work is changing rapidly. While technology is reshaping the way we communicate, work and do business with one another, cultural expectations around work are shifting as well.

Many workers, especially millennials, seek purpose, challenge, flexibility, and personal growth from their work instead of just a steady paycheck. This is a stark contrast from previous generations, like my parents or grandparents, who saw job and financial security as the most important element of choosing a career path.

To adapt to these changes, company leaders are redesigning and restructuring organizations with a key focus on company culture. It’s not that company culture was ever unimportant, but in this new world it’s quickly proving to be a “must-have” rather than a “nice-to-have.” But why has culture become such a key part of the business world? How does one implement culture within a company? What are the benefits of company culture? And what are some companies that have thriving cultures?

The unstoppable benefits of company culture

Why do we work? Certainly, because we need to earn a living. But it turns out that financial gain is not the only, or even the most important, factor that makes us get up and go to work for the majority of our adult lives. Barry Schwartz, a Swarthmore psychology professor, explains in his book, Why We Work, that the list of non-monetary reasons people give for doing their work is long and compelling. In an excerpt published by QZ, Schwartz said:

"Satisfied works are engaged by their work. They lose themselves in it. Not all the time, of course, but often enough for that to be salient to them. Satisfied workers are challenged by their work. It forces them to stretch themselves—to go outside their comfort zones. These lucky people think the work they do is fun, often in the way that doing crossword puzzles or Sudoku is fun."

Schwartz goes on to explain that satisfied workers also use work to “achieve a level of mastery or expertise” which helps them to learn new skills and grow, both personally and professionally. As workers seek more than just monetary benefits from the work they do, cultural benefits are often the most important factors that motivates them to bring their best to work every day.

The rise of Millennial workers and the fall of unemployment

Millennials now make up more of the U.S. workforce than any other generation—just over 1-in-3 American workers today are Millennials (adults ages 18 to 34 in 2016). This could point to why workplace culture has become such a hot topic, especially because millennials crave more from a career beyond simply finding a job that brings home stable pay.

On top of this, unemployment is down to under 5% in the U.S. (4.9% in early January 2017) and with more choice comes more competition for talent. Business leaders have realized that it’s no longer enough to simply view salary alone as an equal exchange for an employee's time. Resources like LinkedIn and Glassdoor have also made employment information, reputation, and history public knowledge, meaning that word spreads fast about both good and bad places to work. Combined, all of these factors have shifted power from employers to employees and pushed leaders to focus on the benefits company culture and creating fulfilling workplaces.

What are the benefits of company culture?

In a world where, according to a Gallup poll, nearly 70% of employees are disengaged from their work, it’s clear that for many, work life falls short of what we seek and need to be happy and satisfied. Could company culture be the answer?

Mark Bertolini, CEO at Aetna, a health insurer with over 50,000 employees, certainly believes so. Following a near-death experience, Bertolini overhauled his personal health while concurrently refreshing the culture at Aetna and the results are fascinating. As reported in the New York Times in 2015, Bertolini offered free yoga and meditation classes to Aetna employees; and more than 13,000 workers (one-quarter of the company’s work force) have participated. Those who have taken part report, on average, a 28 percent reduction in their stress levels, a 20 percent improvement in sleep quality and a 19 percent reduction in pain. These employees have also become more effective on the job, gaining an average of 62 minutes per week of productivity each, which Aetna estimates is worth $3,000 per employee per year.

Companies who have a strong focus on company culture have also become iconic from an employee standpoint, with company culture benefits being one of the key factors employees cite for wanting to work there. If you take a look at Glassdoor’s Best Places to Work, Fortune’s Best Companies, and LinkedIn’s In-Demand lists, one trait many of the leading companies share is a strong focus on culture.

Netflix, for example, shared their "freedom with responsibility" culture manifesto and it’s been viewed over 15 million times. Since its early days HubSpot has focused strongly on the benefits of company culture by creating their ‘Culture Code’—a playbook that has over 700 team members and more than 12,000 customers. Zappos’ cultural values have also played a pivotal role in their growth. Now, in 2017, work culture is seen as an essential element for many companies and leaders can connect the dots between positive culture and rises in bottom-line figures.

These days you can’t browse Medium or Meetup without encountering articles, “think pieces,” events, and conferences that focus on the importance of workplace culture and claim to show you how you can go about manifesting it within a company. However, in some cases, "culture" isn’t more than skin deep.

Gillian Davis, of ustwo elaborated on this notion at the company’s ‘ustwo Thinks’ event on the benefits of company culture: “You don’t just put plants and nice artwork up – that’s not culture. Culture is fundamentally the behaviours that people are exhibiting and the values they are living by – not the ones on the wall but the ones that are actually rewarded.”

Every company has benefits to their company culture, whether deliberate or not. And a new culture can’t just be put in place. It takes a shared belief, collective focus, hard work, and time. To start creating a cultural strategy, company leaders can think about the shared values they’d like to represent the business. Many companies are now choosing to create a set of values that help to put in words the culture they aspire to. Here are just a few ways to build a great company culture from the ground up:

Make it authentic
Company culture is everyone’s responsibility and it’s important to consider a wide and diverse range of viewpoints when it comes to outlining company values. You can’t simply pull some random values out of the air and hope your employees abide by them. However, culture should start from the leadership team, and should reflect the overall company goals and vision. You’re no longer just building a business, you’re building a workplace - a place where your employees will spend most of their weekdays.

Work to your vision
Just as perks don’t make translate to the benefits of company culture, simply writing down a list of values doesn’t lead to a sustainable, thriving culture. Once you have gone through the challenging process of defining a vision for your workplace you need to do the work of bringing that vision to life on a daily basis. If you want creativity to be key to your culture, you need to embrace that and create time and space for your team to be creative. For example, you could set aside 10% of time to openly brainstorm or creating space in your office where there are big open areas that encourage collaboration.

Think about outcomes
Culture is one of those things that can be very challenging to measure. But that doesn’t mean it’s impossible. You need to begin with defining what specific outcome you are looking to achieve. For example, good employee retention could be a sign of a thriving culture. Or if you’re embracing a creative culture, then you could measure the number of weekly brainstorm sessions or new project ideas. Great culture should have a hugely positive impact on your business, but without knowing the outcomes you’re looking for, it can be hard to measure success.

What do the benefits of company culture look like: Three shining examples

Buffer
Social media management company Buffer is well-known for its culture and radical transparency and has made employees' salaries, revenue, and even equity breakdowns public for anyone to see. Transparency, however, is just one of Buffer’s 10 core values.

ustwo
A combination studio for digital products and games and a startup incubator, ustwo’s mission is to launch products, services and companies that make a meaningful impact on the world. Without a strong focus on culture their mission would not be possible. ustwo co-founder, Matt ‘Mills’ Miller, explained more about ustwo’s unique take on culture to Offscreen: “The focus has always been on building what I refer to as a ‘fampany’ — a family company, bonded by intense friendship and utmost loyalty. From day one we set out with a mutual understanding that we would constantly need to change and adapt, which I believe is crucial to our success. Creating an environment that nurtures experimentation and pushes people to be better is what allows us to compete for the best talent out there. Being known for great work is one thing, but we always wanted to be known for being a great bunch of people to work with.”

Warby Parker
For some brands, customer delight is somewhat of a buzzword. For Warby Parker, it’s fully ingrained in every aspect of their business. Empathy is a key part of their culture and everyone, whether they’re working in retail or the CMO, is deeply focused on delivering the best for the company’s customers. The eyewear brand also has a unique approach to management and has made efforts to reduce management’s influence over employees' time. The company invites all of its 800 workers to help manage the business, an approach they’ve internally named “Warbles.”

Speaking to Quartz, Warby Parker co-CEO, Dave Gilboa, explained how this approach has benefited the company, “[Warbles] ensures we’re getting a lot of value out of the tech team. Our engineers are much happier; they love the idea that they have autonomy and they can select ideas that they find most interesting.” Culture is no longer a buzzword. It’s not just something Facebook, Google and the hippest startups do. Whether intended or not, culture is alive and kicking within every business. With with talented people choosing passion and purpose over security and paychecks, leaders must adapt and look to build companies with thriving, unique cultures, and great work environments if they want to succeed. Culture isn’t an option, it’s a necessity.

Need an extra pair of hands around the office as you build a great culture? Managed by Q can help keep your workspace clean, organized, productive and happy.