Behind the Battle Over the Office Thermostat 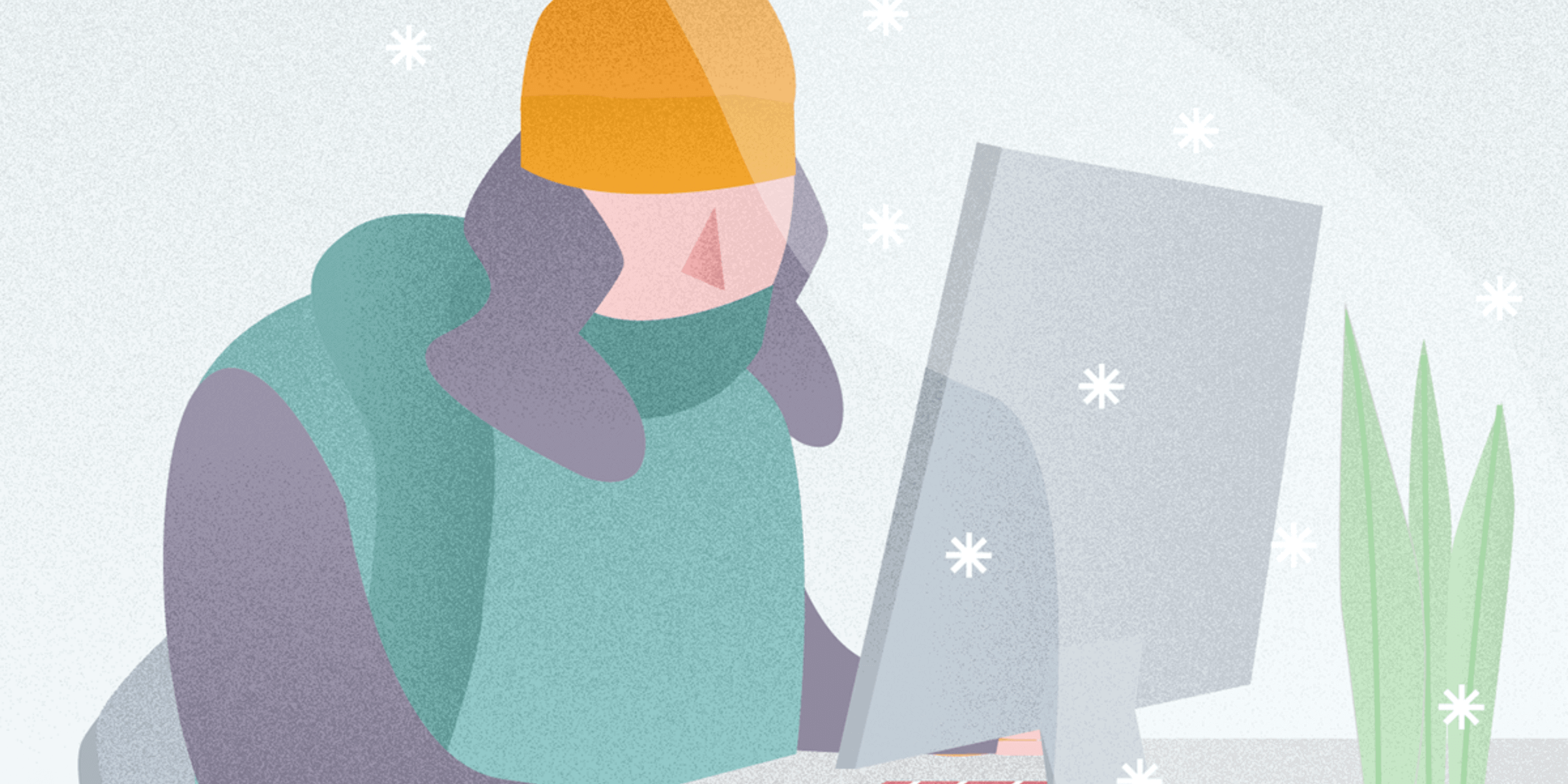 In the northern hemisphere, August has long been known for bringing on the “dog days of summer." As a result, air conditioner use has also be on the rise, bringing in-office temperatures to some of the lowest of the year—and for many, that means spending weeks in a workplace that’s several degrees below comfort level.

More often than not, women are the ones bundling up at their desks through summertime, though employees of all genders have reported feeling the chill. Experts say this phenomenon can be traced to a decades-old algorithm for indoor climates that centers around a certain kind of worker: a 40-year-old man with a fairly lean build.

According to a widely shared 2015 study, this algorithm dates back to the 1960s, and factors in several variables to reach an ideal temperature for the perceived average worker. Researchers found that one of the primary variables in this “empirical thermal comfort model,” which has reportedly controlled most offices’ AC systems ever since, involves the basal metabolic rate (BMR) of the ‘average’ worker. This defines how quickly a person expends energy while at rest, thereby creating a level of body heat that requires neither sweating nor shivering to maintain.

Because people on the female gender spectrum typically have lower BMRs than male-spectrum folks do, one of the primary variables in this AC algorithm may leave women out in the cold from the start. According to the researchers, such formulas could even overestimate the average female metabolic rate by up to 35%—meaning women would typically have to expend well more energy, pile on heat-retaining layers, or both, to keep their bodies at the right temperature at work.

This kind of cooling behavior doesn’t just demand more energy from certain workers (whether it’s the calories needed to shiver or to haul extra sweaters around). Overcooling is also a major contributor to the carbon footprint of buildings, according to Kingma’s team, draining money and resources along the way.

And despite efficiency upgrades to these systems, their success is often “undermined,” as Scientific American put it, by occupants who seek to adjust for personal comfort with space heaters in the summer or open windows in winter. “People will adapt their behavior until they are comfortable,” Kingma told the site.

As such, the study proposes “[using] actual metabolic rates” in future cooling algorithms, which may require some bodily self-reporting by office workers. More specifically tailored temperatures could help occupants be more comfortable in shared buildings, according to Kingma’s team, and meaningfully bring down the carbon cost of such buildings, which account for almost half of U.S. energy use.

More occupant-specific ACs could help ensure that both statistical outliers and those who fall in the midst of the spectrum are accounted for too—something that interests men just as much as women. In response to its coverage of Kingma’s study, for example, the New York Times received a flood of responses from women who cheered the new assessment, but also from men who still find themselves sweating in peak AC season.

Men tend to be most comfortable in rooms of around 71 degrees Fahrenheit, according to Kingma, so the 77 degrees preferred by women can be uncomfortably hot. Taking off your jacket can only do so much, Times readers pointed out (in so many words), and while women have some cooler options for summer wear, many offices still require long pants and button up shirts from men.

Some readers suggested that if office temperatures are going to rise along with outside ones (and if we’d like to deccelerate the latter), then office culture needs to evolve with the climes. That could mean showing more consideration in how we share these climate-controlled spaces, and rethinking how a group’s values are reflected by the environment they’ve created to work in.

If employee comfort and productivity are more important to a firm than decorum, for example, that firm could consider allowing all employees to wear (reasonable) shorts, and short sleeves. As it turns out, temperature actually plays a big part in how people perform, making it a valuable area for employers’ attention.

As BBC News explained last year, research has shown that warmer or colder settings can affect our success with different tasks, though most studies to date have been small. In one study, nine women who worked in an insurance office were able to type nonstop with an error rate of just 10% when the room temperature was 77 degrees, but became half as productive, with twice as many errors, when the temperature fell to 68. In another study, students who were asked to pick the most cost-effective phone plans performed better in a 66 degree room than in a 77-degree room, “suggesting complex decisions are more difficult when we’re warm.”

At the same time, as noted by BBC News, warmer environments tend to be conducive to creative and collaborative behavior, while cool environments seem to help people keep their mind (or at least their focus) on repetitive tasks for longer. Overall, some experts think that somewhere between 71 and 75 degrees lies the ideal temperature for office-type work that involves mental but not much physical exertion; on the other hand, some might find that simply too hot, or too cold.

Recommendations for shared workplace temperatures vary, and few organizations or governments seem anxious to put those numbers on the books. In the near future, today’s smart thermostats may evolve into customizable, personal climate zones, making the search for an all-inclusive algorithm effectively moot.

In the meantime, scientists have some ideas that might help you handle those last few degrees between your ideal temperature and the office reality. The BBC cited a small study which showed that subjects who spent time in a cool room felt “significantly warmer” if the room was lit with sunset-like ‘warm’ lighting rather than ‘cool’ tones, suggesting one option for workers to gently trick themselves into greater comfort. According to research, simply holding hot or cold drinks is an effective way to adjust mind and body temperatures, too.

Kingma pointed out that spending time in a range of temperatures can also be good for our overall health, even if modern life doesn’t always permit. “By exposing yourself to mild cold and mild warm environments you get both cardiovascular and metabolic exercise,” he told BBC News in 2016.

Whether you choose to use lighting mind tricks in the office or simply wait out the personalized climate revolution, there’s hope that if you’re totally freezing or sweltering alongside your comfortable peers, science has determined it’s not in your head.