Should You Allow Dogs In The Office? (Pros & Cons Of Bringing Dogs To Work) 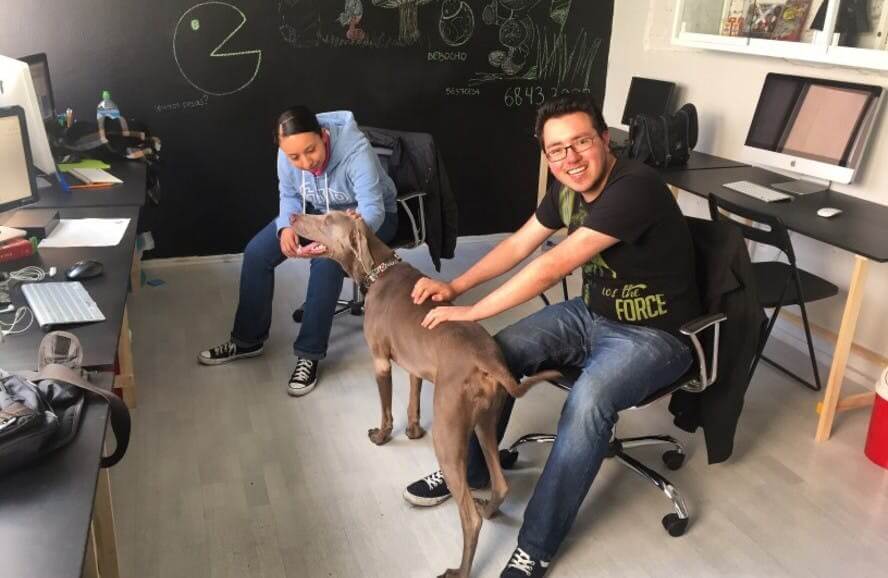 As the old saying goes, “A dog is a man’s best friend.” In workplaces across the United States, employees are spending their days along their colleagues’ fury, four-legged creatures.

Though a dog-friendly workplace is still relatively rare, it’s gaining momentum and it’s clearly no longer an outlandish idea. From the years 2013 to 2018, there was a 3% increase of offices which allowed owners to their dogs to work going from 5% to 8%.

Before you tell your coworkers that it's okay to bring their dogs to work, we highly recommend reviewing both the pros and cons of having dogs in the office.

Benefits of Having Dogs In The Office

There are numerous reasons why letting your colleagues to bring dogs to the workplace is a fantastic idea. Here are a few pros:

Studies have shown that dogs can help alleviate stress, anxiety, depression, and isolation. Even if a colleague loves their job, everyone is bound to have a tough day. And when they get stressed or anxious, the office dog could potentially help.

Are you tired of always grabbing coffee or lunch for a one-on-one meeting? Having an office dog will spice things up. Dogs need to be walked at least once or twice a day. You and your colleague can walk the dog around the block and get some exercise while discussing important matters.

If multiple employees bring their pets to work, this could foster some friendships because it serves as an icebreaker. They could go on outings together to dog parks and dress their pets in matching outfits during special holidays. Though it may take some time for the dogs to get used to one another, there’s nothing cuter than dogs becoming best friends.

4.  Employees Can Get Some Exercise

Going for a walk has been shown to improve one’s mood and overall physical health. When the dog-owner is occupied, they can assign the task of walking their pet to one of their colleagues. Feeling anxious before that big meeting? Go walk the dog!

For employees that can’t bring their dogs to work, there are a ton of options ranging from daycares to dog-walking apps. However, not everyone can afford them. A CostHelper analysis concluded that dog daycares costs anywhere from $240 to $550 per month.

Drawbacks Of Having Dogs In The Office

Even though some employees might be happy to have their dogs come to work with them, there are some drawbacks you should consider:

A healthy dog will urinate at least once every 8 to 12 hours and poop once a day. But this could be more depending on the canine’s diet.  If you allow dogs at work, you will have to accept that there could be a time in which a pet will go to the bathroom in a common space and cause an inconvenience.

2. It Can Get Pretty Distracting

Especially compared to other pets, dogs can require a lot of attention. Anyone with a dog could tell you that when they don’t get enough of it, they can act out and cause a ruckus. Your colleague won’t have the time to constantly be attending to their dog’s needs —they will have meetings, projects, and general tasks. That means that some of your colleagues may have to pick up the slack. Is your entire workplace willing to do this?

Bringing a dog to a brand new environment comes with its own set of risks. According to the American Kennel Club, anxious dogs can engage in “destructive behavior.” And within the context of your workplace, that could very well mean property damage that’s costly and inconvenient.

A study conducted for the Allergy, Asthma, and Immunology Research journal, found that 12% of Americans have some form of an allergy to dogs. While this is a minority of people, having a dog at work can be a significant inconvenience for them that will take away from their productivity and workplace happiness. Even if none of your current colleagues are allergic, having a dog-friendly workplace could potentially scare off people considering working for your company.

Tips For Having Dogs In the Workplace

If your workplace decides to allow dogs, you should have rules in place to ensure that they don’t take away from workplace happiness. Here are a few tips:

Whether it’s cleaning up poop or making sure that their dog isn’t frantically hungry, a pet’s owner should be the one who is responsible. Before a colleague decides to bring their dog to work, communicate that to them.

2. Cut Down on Playtime If It’s Distracting

There will be days when everyone is in the mood to watch a dog play, jump, and perform tricks. But there will surely be moments when people just want to work in silence. When a dog’s playtime becomes distracting, talk to the dog-owner and ask if they can play with their dog outside.

There’s a good chance that if you allow for one dog, another employee might get the same idea. However, there are some risks to having multiple dogs at the office. Some canines are overly aggressive to other dogs and within the context of your office, this could lead to conflicts and distractions. If you allow for more than one dog, make sure that both of your colleagues read up on how to socialize their pets.

Do What’s Right For Your Office

Allowing dogs at work isn’t something that should be taken lightly. Just because it’s trendy doesn’t mean it’s necessarily right for your office. What could be a perk for some companies could actually bring a stress for others. Ultimately, it will be a decision that you will have to decide together as a community.

One approach that many companies have taken is to designate specific days where dogs are allowed to be brought to the office. This way, any employees that prefer not to be around dogs can plan to work remotely on those days.

Are you interested in making your workplace more efficient? Check out what Eden’s Workplace Management Platform can do for your office.